Q2. Sodium reacts with water more vigorously than lithium because:

This behaviour of lithium is attributed to its small size and very high hydration energy. Sodium is more electropositive than lithium.

Q3. How will you prepare sodium carbonate by Solvay Process?

Q4. We can get beryllium hydride by:

Q5. Be can show coordination number four while other members show a value of six. This is because of:

Due to non availability of d orbitals in Be, it can show coordination number four while other members show a value of six.

Q6. The salts of alkali metals are the most ionic salts known. Although lithium is an alkali yet its compounds, particularly halides, are slightly covalent in nature.

It causes the charges on the ions to become less since some of their charges get neutralized. This leads to the covalent character of the bond.

The larger the polarization, the larger will be the covalent character of the bond. Thus, Li+ being small in size polarizes the anion and results in a decrease of the positive charge on Li+ ion. Therefore, lithium halides are covalent in nature.

Q9. What are the features of lithium which separates it from other elements of Group 1?

The following features separate lithium from the other elements of Group I:

(i) Lithium is the hardest of all the alkali metals.

(ii) The melting and boiling points of lithium are much higher than those of other elements of Group 1.

(iii) Lithium is less reactive as compared to other metals and it does not get tarnished readily in air.

(v) Because of high polarizing power of Li+ ion, the salts of lithium have lower ionic character than salts of other alkali metals.

(vi) While other alkali metals do not react with nitrogen, lithium does, forming nitride.

(vii) Only lithium combines with carbon and silicon forming the carbide and the silicide.

(viii) Lithium hydroxide and carbonate are unstable and decompose on heating while the corresponding compounds of the rest of the family members are stable and do not decompose:

(xii) The hydride of lithium (LiH) is more stable as compared to the hydrides of other members of the family.

(xiii) The Li+ ion and its compounds are more heavily hydrated than those of sodium.

(xiv) Lithium hydroxide is much less basic than the hydroxides of other metals.

(ii) BeH2 from BeCl2 Give reactions only.

Q11. Which of the following is kept under kerosene:

Q12. Li shows difference in properties than rest of the members of its group but shows similarities with:

Q13. Why the hydroxides of alkali and alkaline earth metals are basic in nature? Explain the periodicity of these hydroxides.

The hydroxides are basic in nature and basic strength increases down the group. This is due to the low ionization energies of these metals where the M-O bond in MOH is weak and it can cleave to give OH– ions in solution.

As the ionization energy decreases down the group, the basic strength of the hydroxides increases. For example, Be(OH)2 is amphoteric, Mg(OH)2 is mildly basic while others are strong bases.

Q14. Why are potassium and caesium, rather than lithium used in photoelectric cells?

Because of low ionization enthalpy of potassium and caesium as compared to lithium, they are able to lose their outermost electron when exposed or irradiated with light. This property makes caesium and potassium useful in photoelectric cells.

Q15. How calcium carbonate can be prepared?

Q16. Why is LiF almost insoluble in water whereas LiCl soluble not only in water but also in acetone?

Due to high lattice enthalpy of LiF as compared to LiCl, LiF is almost insoluble in water. LiCl is soluble in acetone also due to larger anion as compared to cation, polarization occur and thus LiCl posses some covalent character.

Q17. What is baking soda? How is it prepared?

Q18. Why alkali metals are kept in kerosene oil?

Because of the high reactivity of alkali metals they are kept in kerosene oil. 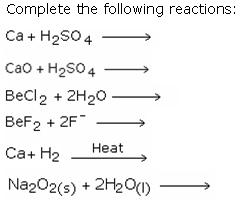 (i)     The reducing nature is determined by the tendency of losing electron. Since this tendency is lower in alkaline earth metal than alkali metal, the former are weaker reducing agent.

Q21. How are magnesium and potassium biologically important?

Magnesium and potassium ions are found in biological fluids. These ions perform function like maintenance of ion balance and nerve impulse conduction. Enzymes that utilize ATP in phosphate require Mg as the cofactor.

Potassium ions are the most abundant cations within cell fluids. They even participate in the oxidation process of glucose to produce ATP. Sodium and potassium ions are responsible for the transmission of nerve signals. Also Na-K pump operates within the cell membrane.

Q22. When an alkali metal dissolves in liquid ammonia the solution can acquire different colors. Explain the reasons for this type of color change.

When alkali metals are dissolved in liquid ammonia they give blue colored conducting solution. This solution contains ammoniated electron which absorbs light in the visible region and imparts a blue color to the solution.

This solution is paramagnetic. In the concentrated solution, the blue color changes to bronze color, and the solution becomes diamagnetic.

Q23. Beryllium and magnesium do not give color to flame whereas other alkaline earth metals do so. Why?

Generally the colour of flame of alkaline metals are due to the  reason that electrons are excited to higher energy levels and when they drop back to the ground state, energy is emitted in the form of visible light.

Lithium differs in many respects from the remaining characteristic properties of the metals of Group 1, due to the following reasons:

a) The size of lithium atom and ion is very small.

b) The polarizing power of Li+ ion is quite high and results in the covalent character of its compounds.

c) It has high ionization energy and least electropositive character.

d) It has no vacant d-orbitals in its valence shell.

Be(OH)2 and Mg(OH)2 are almost insoluble, Ca(OH)2 is sparingly soluble while Sr(OH)2 and Ba(OH)2 are fairly soluble. This is due to increase in size of the cation and decrease in their lattice energies on moving down the group.

Hydration energies become more due to decrease in lattice energies and so the solubility of hydroxide in water increases. This explains the increasing solubility of alkaline Earth metal hydroxides on moving down the group.

Lattice energy decreases with an increase in the size of the cation and therefore, solubility increases from Be to Ba.

Q26. Discuss any four properties which show the anomalous behavior of Be and its similarity with Al.

The following points illustrate the anomalous behavior of Be and its resemblance with Al.

(i) Unlike groups – 2 elements but like aluminium, beryllium forms covalent compounds.

(ii) The hydroxides of Be, [Be(OH)2] and aluminium [Al(OH)3] are amphoteric in nature, whereas those of other elements of group – 2 are basic in nature.

(iii) The oxides of both Be and Al i.e. BeO and Al2O3 are high melting insoluble solids.

Q27. Why the Mg and Be reacts with air only in powdered state?

Due to formation of an oxide film on the surface of metal they are unable to react further. Hence powdered metal is used to react with air.

Q28. Give method to prepare beryllium chloride. Deduce the structure of the compound.

It is prepared by heating beryllium oxide with chlorine vapours in the presence of carbon.

Beryllium chloride has a polymeric chain structure in the soilid state due to its electron deficient nature. It has only four electrons in the valence shell and can accept two electron pairs (from neighbouring Cl atom forming coordinate bonds) to complete its octet.

Polymeric structure of BeCl2 Each Be atom is tetrahedrally surrounded by four Cl Atoms. Two of the chlorine atoms are bonded by covalent bonds while the other two by coordination bonds.

(i) Sodium metal is dropped in water.

(ii) Sodium metal is heated in free supply of air.

(i) Sodium reacts with water to give sodium hydroxide and dihydrogen.

Because the hydration enthalpies of alkaline earth metal ions, they are larger than those of alkali metal ions. Hence, NaCl and KCl do not form such hydrates as MgCl2 and CaCl2.

Q31. What happens when water is added to lime?

When water is added to lime it forms calcium hydroxide. The process is termed as slaking of lime.   CaO  +   H2O Ca(OH)2

Q32. Why does the solution of alkali metals in ammonia is conducting in nature?

Alkali metals dissolve in liquid ammonia to give deep blue solutions that are conducting in nature. This happens because the alkali metal atom readily loses the valence electron in the ammonia solution. Both the cation and the electron combine with ammonia to form ammoniated cation and ammoniated electron.

Q33. State the common characteristic features of Li and Mg.

Lithium has a diagonal relationship with magnesium and both have similarities in some of their characteristics.

c) Both Li and Mg are quite hard.

d) Both LiOH and Mg(OH)2 are weak bases.

e) Lithium reacts with N2 to form lithium nitride, while magnesium also reacts in a similar way. Other members of the group do not display this characteristic.

f) Both lithium and magnesium combine with oxygen to form monoxides. Other member form peroxides and superoxides.

g) On strong heating, the hydroxides of both metals decompose to form respective oxides.

h) When heated, the carbonates of both these metals evolve CO2.

i) The nitrates of both lithium and magnesium evolve nitrogen dioxide and oxygen on heating.

j) Lithium hydroxide, fluoride, phosphate, oxalate and carbonate are comparable to those of the corresponding magnesium compounds.

However, the solubilities are much less soluble than the corresponding sodium and potassium salts.