Down the group, the atomic size of the element (E) increases and the bond length of the corresponding E—H bond also increases. This adversely affects the bond dissociation enthalpy.

This means that amongst the trihydrides of the members of nitrogen family, the bond dissociation enthalpy of Bi—H bond is the least. Therefore, BiH3 is the strongest reducing agent among the hydrides of group 15 elements.

7.3. Why is N2 less reactive at room temperature?

Due to presence of triple bond between two N-atoms (N = N), the bond dissociation energy of N2 is very high. As a result, N2 becomes less reactive at room temperature.

7.4. Mention the conditions required to maximise the yield of ammonia.

Ammonia is prepared by Haber’s process as given below: 7.8. What happens when white phosphorus is heated with concentrated NaOH solution in an inert atmosphere of CO2?

7.10. Write a balanced equation for the hydrolytic reaction of PC is in heavy water. Sulphur mainly occurs in the combined states in earth’s crust in the form of sulphates and sulphides.

7.14. Write the order of thermal stability of the – hydrides of Group 16 elements.

Due to high electronegativity of O than S, H2O undergoes extensive intermolecular H-bonding. As a result, H2O exists as an associated molecule in which each O is tetrahedrally surrounded by four H2O molecules. Therefore, H2O is a liquid at room temperature.

7.16. Which of the following does not react with oxygen directly? Zn, Ti, Pt, Fe

Platinum (Pt) is a noble metal and does not react with oxygen directly.

On heating, O3 readily decomposes to give O2 and nascent oxygen.

7.19. How is O3 estimated quantitatively?

When O3 is treated with excess of KI solution buffered with borate buffer (pH = 9.2), I2 is liberated quantitatively.

The I2 thus liberated is titrated against a standard solution of sodium thiosulphate using starch as an indicator.

7.20. What happens when sulp’hur dioxide is passed through an aqueous solution of Fe(III) salt?

SO2 acts as a reducing agent and reduces aqueous solution of Fe (III)salt to Fe (II) salt.

SO2 exists as an angular molecule with OSO bond angle of 119.5°. It a resonance hybrid of two canonical-forms:

SO2 is a pungent smelling gas. It can be detected by two test:

7.23. Mention three areas in which H2SO4 plays an important role.

(i) Sulphuric acid is used for the manufacture of a number of chemicals like hydrochloric acid, phosphoric acid, nitric acid along with a large number of organic compounds.

(ii) A mixture of concentrated nitric acid and concentrated sulphuric acid is used in the manufacture of explosives like picric acid, T.N.T, dynamite etc.

(iii) Dilute solution of acid is employed in petroleum refining in order to remove the unwanted impurities of sulphur.

7.24. Write the conditions to maximize the yield of H2SO4 by Contact process.

The key step in the manufacture of sulphuric acid is oxidation of SO2 to SO3 in presence of V2O5 catalyst. 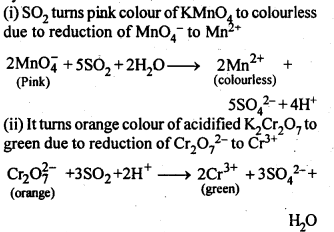 The reaction is exothermic and reversible. Hence, low temperature and high pressure are the favourable conditions for maximum yield of SO3. In practice a pressure of 2 bar and temperature of 720 K is maintained.

H2SO4 is a very strong acid in water largely because of its first ionisation to H3O+ and HSO4– The ionisation of HSO4– to H3O+ and SO42- is very very small. That is why, Ka2« Ka1.

7.26. Considering the parameters such as bond dissociation enthalpy, electron gain enthalpy and hydration enthalpy, compare the oxidising powers of F2 and Cl2.

The oxidising powers of both the members of halogen family are expressed in terms of their electron accepting tendency and can be compared as their standard reduction potential values.

Since the E° of fluorine is more than that of chlorine, it is a stronger oxidising agent.

Explanation : Three factors contribute towards the oxidation potentials of both the halogens. These are :

From the available data, we may conclude that lesser bond dissociation enthalpy and higher hydration enthalpy compensate lower negative electron gain enthalpy of fluorine as compared to chlorine. Consequently, F2 is a more powerful oxidising agent than Cl2.

7.27. Give two examples to show the anomalous behaviour of fluorine.

7.28. Sea is the greatest source of some halogens. Comment.

7.29. Give the reason for bleaching action of Cl2.

The nascent oxygen reacts with dye to make it colourless.

7.30. Name two poisonous gases which can be prepared from chlorine gas.

7.32. Why is helium used in diving apparatus?

Helium along with oxygen is used in the diving apparatus by the sea divers. Since it is very little soluble in blood, it reduces decompression and causes less discomfort to the diver in breathing. A mixture of helium and oxygen does not cause pain due to very low solubility of helium in blood as compared to nitrogen.

7.34. Why has it been difficult to study the chemistry of radon?

Radon is radioactive with very short half-life which makes the study of chemistry of radon difficult.