Notes on Chemical Coordination and Regulation 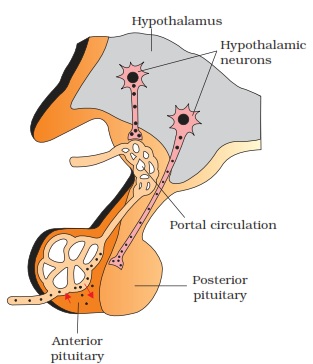 (i) Position and Structure: Hypothalamus is the floor of diencephalon. It is formed of masses of grey matter, called hypothalmic nuclei, containing neurosecretory cells.

(2) It is derived from Greek “Thyreos” a shield.

(3) Location: This is the largest endocrine gland of our body. It is located in our neck upon the ventral aspect of larynx (sound box or Adam’s apple) and a few anterior most tracheal rings. It is a dark brown and H-shaped bilobed gland.

(a) Thyroxine: It is an iodine containing (6% iodine) amine hormone which is derived from tyrosine amino acid. Chemically thyroxine is tetraidothyronine though also found as tri-iodothyronine. Secretion of thyroxine is inversely proportional to the blood level of thyroxine (feedback mechanism).

(b) Thyrocalcitonin (TCT): It is a long peptide hormone secreted by parafollicular by cells of thyroid gland (C-cells). It secretion is regulated by increased plasma level of calcium by feedback mechanism.

(a) Hypothyroidism: (Decreased section of thyroxine from thyroid gland).

(b) Hypersecretion of thyroid hormones (Hyperthyroidism or thyrotoxicosis) : This may also be a genetic defect, but usually it is provided by chronic infections (influenza, rheumatism, tonsilitis, tuberculosis, measles, whooping cough, etc.) pregnancy, intake of large doses of iodine, over-eating, etc. It results into a considerable increase in glucose and oxygen consumption by cells and the rate of oxidative metabolism in the mitochondria.

(1) Hormones of pancreas and their role:

(a) Insulin: Insulin regulates how the body uses and stores glucose and fat.

(b) Glucagon: This is secreted by the alpha cells of islets of Langerhans. Its function is to elevate glucose level in blood when glucose is deficient.

The gonads are the sex glands, the testes and the ovary.

The testis form part of the male reproductive system, and is the gland where sperm and testosterone are produced.

Notes on Neural Control and Coordination